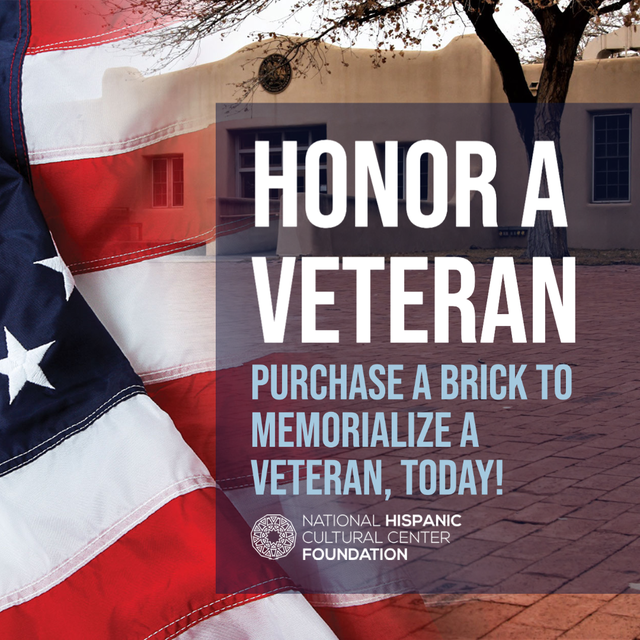 SKU:
$135.00
$135.00
Unavailable
per item
Honor a veteran by purchasing a brick at the National Hispanic Cultural Center Plaza Mayor. Once purchased, a personalization form will be sent to you. Personalization forms will need to be returned by 11/16 to insure placement for the holidays. Bricks will be placed in the order they are received in the Padilla and Mora Memorial Park located on the NHCC Campus.
$135 pricing available from 11/4 – midnight on 11/11, Veterans day. This is 10% off of the regular price of $150.
Add to Cart

This Memorial Park was named in memory of Manuel Mora and Pete Padilla. It is dedicated in honor of all Hispanic veterans who have served in the United States military. PFC. G. Manuel Mora and Sgt. Pete Padilla were both Barela’s Community leaders who lost their lives in Vietnam.

PFC. G. MANUEL MORA (1949-1969)
Manuel Mora was born on March 1, 1949, in Albuquerque, New Mexico, to Manuel and Albina Mora. One of four children, Manuel attended Riverview Elementary, Washington Junior High, and Albuquerque High School, graduating in 1968. Throughout school, Manuel was very engaged in Boy Scouts, becoming one of New Mexico’s youngest Eagle Scouts. Manuel joined his Boy Scout Troop on trips to Washington, D.C. in 1962, meeting United States Congressman Joseph Montoya, and again in 1964, meeting President Dwight D. Eisenhower.  In 1968, Manuel enlisted in the Vietnam War and served one tour.  Two months before he was to return home, on June 17, 1969, Manuel died in action in the Quang-Tri Provence of Vietnam.
Manuel was a strong leader among his peers, a well-respected member of the Barelas community, and a dearly loved son and brother. Manuel is laid to rest in Mt. Calvary Cemetery, and was honored in 1970 with the dedication of a recreation center that once stood in this same area.

SGT. PETE PADILLA (1941-1966)
Pete Padilla was born on March 26, 1941, in Mountainair, New Mexico, to Joe and María Padilla, and moved with his family in 1944 to the Barelas neighborhood in Albuquerque, New Mexico. The second of nine children, Pete attended Riverview Elementary, Washington Junior High, and Albuquerque High School, graduating in 1960. During high school, Pete served as captain and co-captain of the baseball and football teams, in addition to working to help support his family. Between 1958 and 1962, Pete built an impressive 58 to 3 record in boxing, a sport he took up on a dare.  Then, in 1962, with the Vietnam War progressing, Pete enlisted and went on to serve two tours in Vietnam. On March 28, 1966, just two days after his 25th birthday, Pete died in action in the vicinity of Quang Ngai.
Pete was a mentor among the Barelas youth, pushing neighborhood kids to stay in school and work hard. He loved sports and wrote poetry.  He was a beloved son, brother, friend and leader. Pete is laid to rest in the Santa Fe National Cemetery, and a park that once stood in this same area was dedicated in his honor in 1970.